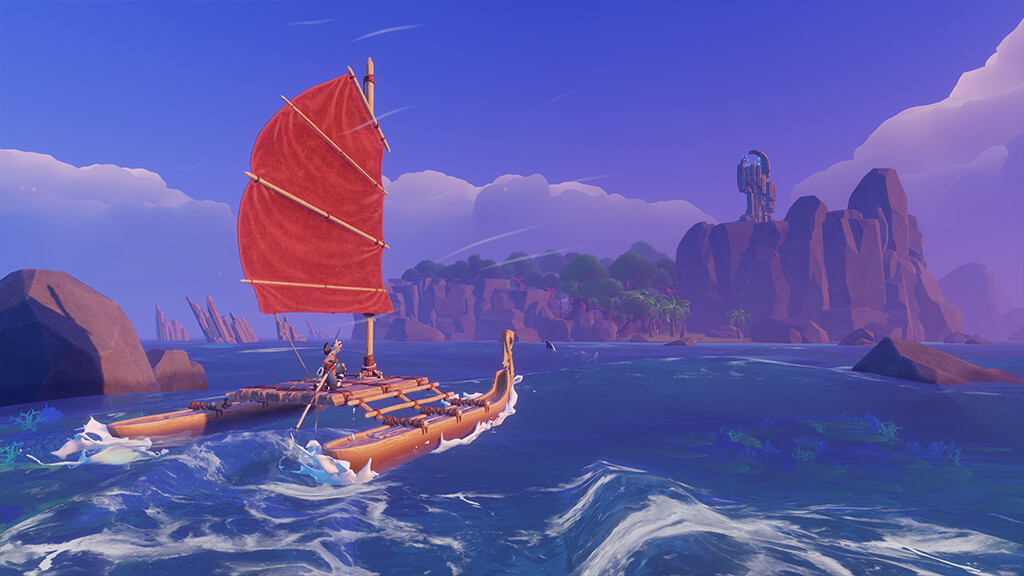 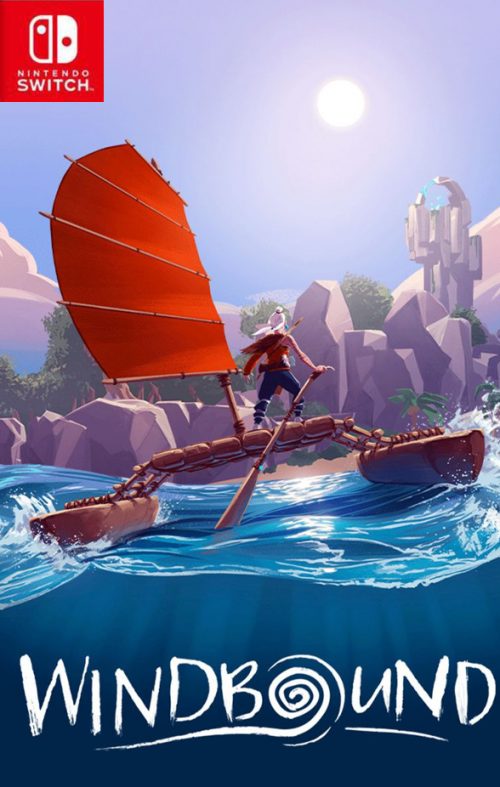 Windbound is a survival adventure game with rogue-like progression and procedurally generated islands. The main focus is centered around gathering and crafting items to help you and your raft survive, as you sail from island to island. Unfortunately, Windbound feels more half-baked with mostly wasted potential, than it does a wondrous island hop. Riddled with game-breaking bugs, an uninteresting storyline, and repetitive game design I had difficulty even finishing the game, let alone being able to recommend it.

Upon starting your Windbound journey you are asked whether you would like to play on Survivalist or Storyteller difficulty. Survivalist is the recommended “full Windbound experience.” If you die on Survivalist, you only keep the items you are holding (not in your bag or on your raft) and you are returned to the start of chapter 1. Storyteller difficulty allows you to keep your full inventory and chapter progress, as well as having a reduced combat difficulty. It should be noted that in either difficulty when you die, you lose your entire raft and any supplies built onto it. This can be especially painful when you have worked to build and upgrade your raft well into chapter 4, only to die (or encounter a game-breaking bug) and start again with no boat at all, not even a grass canoe.

You play as Kara, an abandoned warrior who washes up on shore after getting separated from her tribe when her boat goes down in a terrible storm. Waking up alone, on the wet sands of a forbidden island, you have no food, no gear, and no help. It’s up to you to scour each island for food to stave off hunger and gather materials that will enable you to craft a means of escape, back to your tribe.

Story wise, that’s about all you get. Broken up into five chapters, you receive some hieroglyphic revelations at the end of each chapter, but it’s pretty difficult to discern any real meaning from them. I suppose this lends added weight to the mysterious element of the journey, but it feels like a missed opportunity to really build up any lore, and mostly leaves you with the feeling of a throwaway checkpoint before the next chapter.

Taking your first real look around the island you awaken on, you can’t help but feel excited. Excited to explore and find what secrets the islands have to offer. Excited to start gathering resources, which at first are nothing more than thick grass, rocks, and sticks. But that’s ok. It’s only the first island, and you’re just starting out, that’s to be expected. Islands are procedurally generated, so each new island, and/or death, brings about fresh opportunities to find new materials, unlock more crafting recipes, and varying creatures to fight off. While the gameplay loop sounds enticing, the execution and supporting game design, fail to pay off in much enjoyment.

After a fair bit of scavenging you’ll be able to craft your starter raft, a grass canoe. This makes reaching the further islands possible, and opens up what will ultimately be the rest of the game for you. There’s no objective indicator at all, but you eventually learn that each chapter has three magic shells that need retrieving, before you can progress to the portal leading to the next chapter. This is where the formula becomes disappointingly clear, and the repetition sets in. That’s right, one fifth of the way through the game. So the cycle goes: Gather supplies and upgrade your raft. Sail from island to island in search of three magic shells. Sail to the portal for the next chapter. View the uninteresting and uninformative hieroglyphic story wall, and sail to the exit portal. Repeat four more times to finish the game.

This alone is a pretty big knock against Windbound, and the fatigue of which sets in pretty early on in chapter two, when you realize, this is all there is. All the islands look vaguely similar and the platforming to scale the rubble surrounding the magic shells is underwhelming and identical for every retrieval, in every chapter. Even the idea of sailing the open seas on your custom crafted raft is spoiled, as the act of sailing is a grueling struggle.

5 Lives Studios designed sailing to feel believable and react realistically, and they nailed it in the worst way. This is a good idea in theory, but it quickly becomes a nuisance to navigate, sucking all the joy out of the journey. When you’re fighting against survival elements like a continually dropping hunger meter, and your food is degrading and putrefying, the last thing you want is to be stuck in the middle of the ocean, with no wind to push you to the next island, or pushing against you, preventing you from reaching said island.

Once you reach a new island, hunting, crafting, and upgrading is the core loop on offer. Hunting is rather simple and straightforward. By holding the left trigger down, you automatically target the nearest enemy and can either attack with your weapon, or dodge roll. Weapons include knives, spears, bows, and slings, with slings being my least favorite and almost wholly ignored, due to a bizarre and unintuitive targeting mechanic. Crafting is initially hindered by a severe lack of inventory space, though in the later chapters, you can discover recipes for larger bags which address storage space and food degradation.

Each element of Windbound holds the promise of something great, but is ultimately squandered. Sailing sounds like fun, but due to the realistic design, it becomes a chore. Your starter canoe is painfully slow and a fully upgraded raft is faster, but at the cost of control. More often than not you will be flipping and tipping over, in your meticulously crafted uber-upgraded raft. Not a good feeling after working so hard to gather and craft the best boat you can build. Instead of feeling like an accomplished survivalist, you end up feeling like you’re being unnecessarily punished.

The exploration to locate magic shells becomes monotonous, and the story provides no incentive to keep trudging on. Hunting and attacking is a similarly unimpressive experience, and can be largely skipped entirely, if you just make a beeline for the magic shells and portal. And why wouldn’t you if you’re just in a race against the clock (or hunger meter) to reach the next chapter. While crafting and upgrading can be fun at times, it ends up feeling like wasted effort as persistent and untimely game-crashing bugs sends you back to square one. Even on storyteller mode you lose your boat, all it’s upgrades, and everything on it (like additional bags and their contents).

The two best features of Windbound, for me, were the art style and the music. The cartoony cel shaded visuals are inviting and lend to the overall appeal of the game. This design choice keeps things from feeling overly harsh and are truly a pleasure to take in. While the music is generally pretty low key and goes unnoticed while on an island, that all changes once you hit the open water. Sailing on your raft provides the most serene and melodic piano score you can imagine. The peaceful vibes serve there purpose well, to lower the tension level from the prior island, and encourage you to strike out for yet another.

Windbound (NS)
Summary
My time with Windbound left me wishing the game would have focused on either a rogue-like journey, or a survival one. The combination of the two felt like they were constantly working against each other, hampering any real enjoyment. The crafting, music, and unique art style are the bright spots on this voyage. However, they get lost among the poor design choices, repetitious progression, and recurring game-crashes resulting in major progress loss and an unwelcomed sense of futility. Whatever potential Windbound had, went down with the ship.
Pros
Lovely Paino Music While Sailing
Unique Artstyle
Crafting Can Be Fun
Cons
Uninteresting Story
Repetitive Progression
Game-Breaking Bugs
Long Loading Times
Should Have Been Rogue-like OR Survival, Not Both
5
Final Score