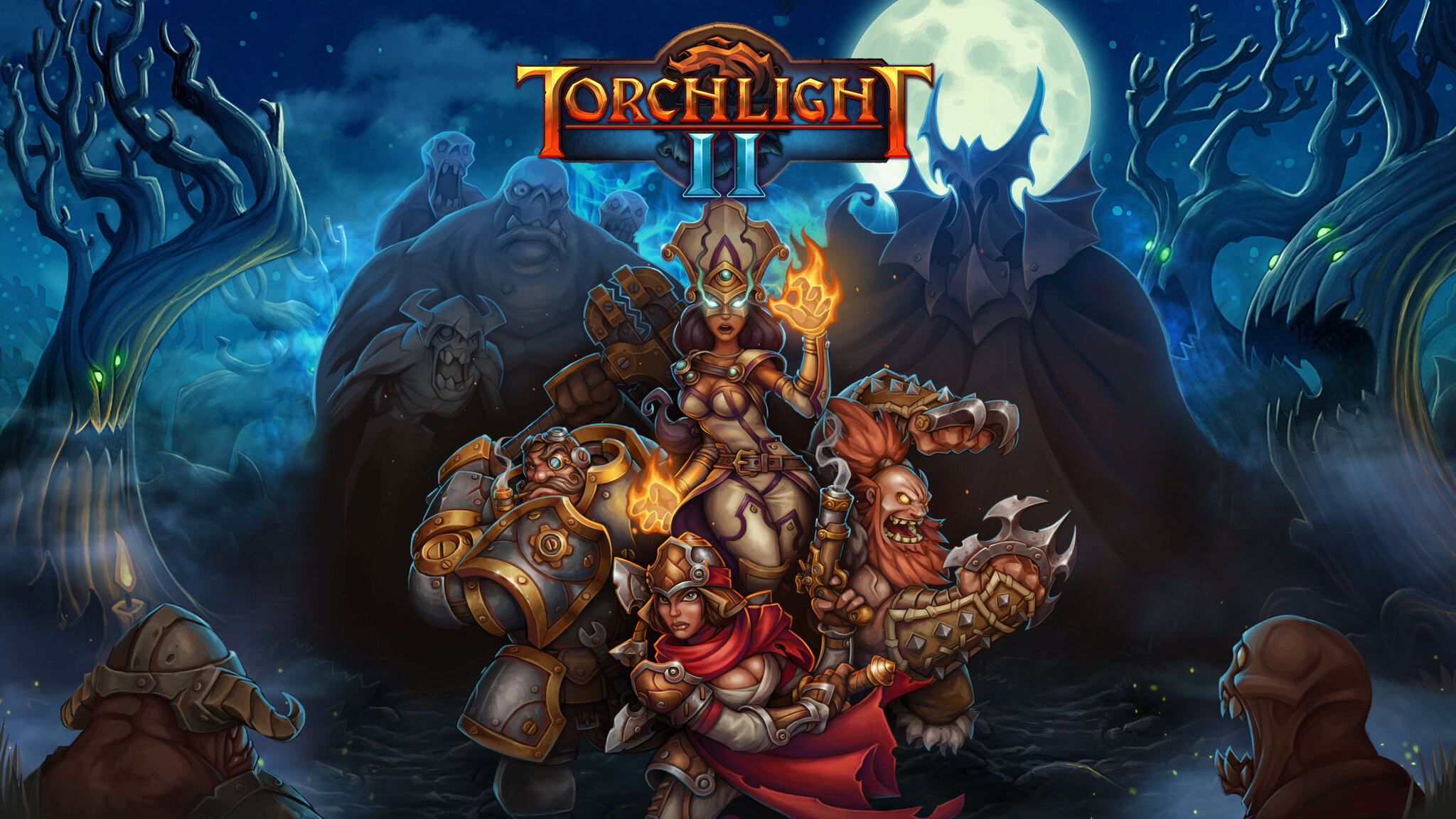 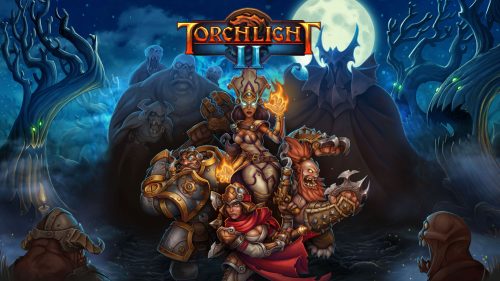 -Fixed issues with initiating the “Ghosts of Plunder Cove” quest

-Still no fix for the Transmuter NPC

After 7 years, Torchlight II – an action-RPG dungeon crawler from the developers at Runic Games, ported by Panic Button – finally makes its way to consoles. Gear, gold, and grinding is still the name of the game, with time spent in your inventory as important as on the battlefield. Featuring a completely revamped UI, with online co-op for up to four players and an ever-changing dynamic world, Torchlight II feels right at home on the Switch.

Torchlight II spans three Acts, each one loaded with more and more deadly monsters to match your rising gear level. Like Diablo, you hack your way through an onslaught of enemies who litter the ground with gold and loot. I honestly don’t know what’s more fun, melting beasts with a newly acquired skill, or pouring over inventory loot to min/max your way to ever-greater heights. Along your journey you will acquire skills, allocate stats, enchant gear, socket gems, equip legendaries…. Have I piqued your curiosity yet?

The story to me is rather forgettable, but that’s generally true for any dungeon crawler. You come for the action, the loot, and the levels. The general through line is the Alchemist destroys the town of Torchlight and you, the hero, track him down to exact justice. You’ll take on many quests, both main and side, but with the frantic pace of the hack-and-slash action, combined with a blah story, you’ll generally want to skip through the quest givers’ ramblings and get on with it (in which case you won’t be missing much, honest). Speaking of heroes, Torchlight II offers four unique character classes to choose from at the start of the game:

I, as always, am a caster, so I chose the Embermage for my first Switch playthrough. After picking your class there are a few sliders to personalize your character, but the main choice is your pet. With options like a ferret, unicorn, panda, owl, panther, and more, your decision will be a tough one. Pets fight alongside you in Torchlight II, but their DPS isn’t their only redeeming quality. Pets are great for lending extra inventory space and making trips to town for you to sell your junk, or bring back potions and scrolls of identification. One of my favorite aspects of pets is that you can teach them spells! That’s right – I had a Silence casting, Fireball slinging, Nether Imp summoning, Healer Yapper (a troll looking pet). The only downside to my Yapper pet is his battle cry sound bite, which he performs whenever he charges in to attack; it gets real old, real fast.

As we all do once hitting the starting map, I immediately opened the character menu to check out the nitty gritty. The left analog stick cycles through gear slots around my Embermage, while Inventory/Equipped panes appear beside him. Above that are tabs that can be cycled through with the L and R shoulder buttons. At the Skills tab I spent time studying my skill tree, reading up on which skills sounded the most devastating and trying to decide whether I was going to be a Fire, Ice, or Thunder Embermage, or some abomination of the three. Ultimately, I went with Fire as my main skill tree for damage, with a few Ice skills to slow and immobilize the masses. There’s an option in town to respec, but it costs gold, and is only good for the last three skills obtained. Choose wisely.

I was disappointed to find there was no “undo” for skill point assignments. Anyone who plays both PlayStation and Nintendo games knows the frustration of the confirm/cancel buttons across the two systems. I chose the wrong skill on more than one occasion, and it would have been nice to have had the option to undo. Oddly enough, the Stat point allocation menu does let you undo point distribution, prior to leaving the menu, so this may be an issue that will get patched upon release.

In the Stats tab I also noticed the description next to the icons was wrong. The Strength icon gave a description of Dexterity, while the Focus icon describes Vitality, and so on. Only after adding a point does it seem to auto correct and match the right description. The biggest technical oversight, though, would have to be the Transmuter vendor not working. He’s the NPC that combines lesser quality gems into better ones. I had 75 or more gems, all begging to be upgraded, but alas this and other minor bugs will have to wait for a patch.

The controls for Torchlight II feel great and are all customizable (there’s a Binding tab in the character menu that allows for you to remap all the face and shoulder buttons). Initially, L and R are mapped with the health and mana potions. I left those alone, as one needs those readily accessible, and they felt right from the start. As I gained more skills, though, I switched the face buttons around to my liking a few times before settling on my personal setup. The right analog stick zooms in and out on your character, so if you want to be right up in the action you can, though the tactical way to play is more zoomed out. The Select button brings up the Options menu. Here you can invite players, view invites, save games, and toggle genre standards like Show HP Bars or Show Helmets. Finally, the D-pad offers control over your map. Pressing right on the D-Pad toggles the map – mini, large, or off. Pressing up or down zooms in or out. Unfortunately, there’s no control scheme in the Options menu to tell you any of this, so I had to learn through experimentation.

The rest of the game is a pretty faithful port of the original PC title, with the major difference being the reworked UI. The art style is unique and timeless, similar to World of Warcraft; it shows its age, but is somehow still pleasing to look at. Load times are short and map transitions are quick. With no one online yet, I was unable to test the multiplayer component of Torchlight II, but solo play was responsive and clean. Levels are randomized, so you’ll always be getting new layouts, paths, loot, and monsters every time you play. If a greater challenge is what you’re after, the game also features NG+, allowing you to carry over your character, skills, gold, and gear.

Some of my favorite features in Torchlight II are easy to overlook, but the details are what move this game into the upper echelon of dungeon crawlers. For starters, skills have level restrictions, preventing you from sinking all your points into one skill and attaining God-level damage before it’s time. Further, skills have Tiers (1,2 and 3). After enough points are invested, you’ll cross a Tier threshold and that skill will get an added boost (extra damage, longer duration, higher burn chance, etc.). Additionally, gear has equip restrictions, but with two means to achieve it – level or stats. So if you want to wear that level 16 helm, but you’re only level 14, you can equip it regardless of your level so long as you meet the stat requirements, and vice versa.

Torchlight II
Summary
Torchlight II should have come to consoles long ago. A leader in the genre, its non-stop action loop hits all the right notes. While the story doesn’t make an impact, everything else is so incredibly well done that you're unlikely to even mind. Being able to cast Blazing Pillars and Firestorm from the comfort of my bed with the Switch is worth the price of admission alone at $19.99. With Torchlight Frontiers coming soon, now is the right time to play Torchlight II again, or experience it for the first time on the go.
Pros
Top-Class dungeon crawler
Addictive combat
Portable and Affordable
Cons
Weak Story
Transmuter needs patched
8.3
Final Score