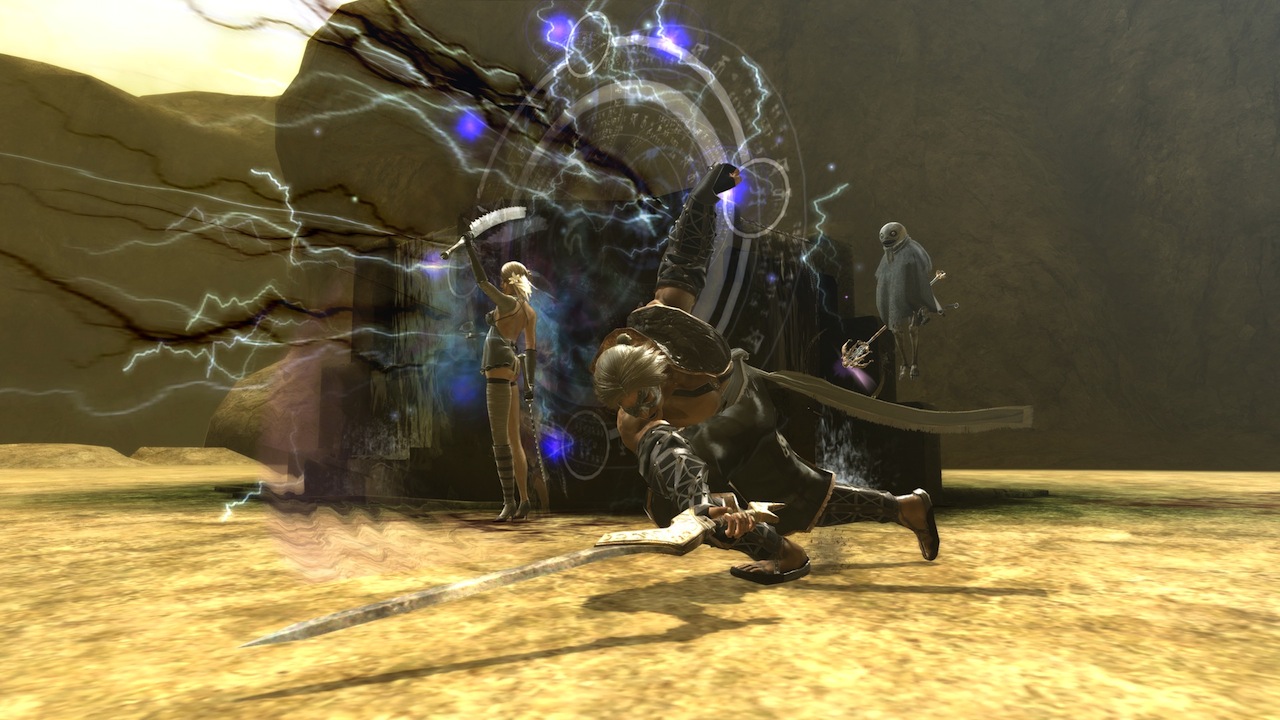 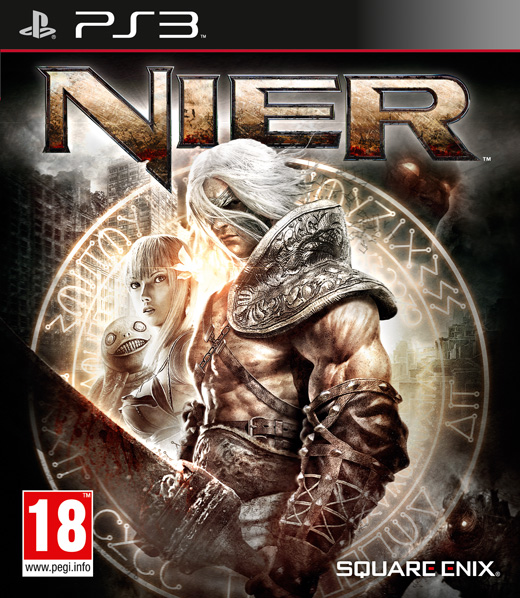 NieR is one of those games that got a bad rap from most of the big gaming review sites, simply because it’s not your typical mainstream AAA title. Outdated graphics and no marketing didn’t help the game either. But this is an RPG being published by Square Enix. That SHOULD count for something, right?

A Father and His Daughter

The game starts off with you and your daughter (Yonah) in dire straits, starving in this desolate place with no food and no hope. Yonah is sick from lack of food and living this way for far too long. As her loving father you’re willing to do anything in your power to save your little girl. NieR does an excellent job of keeping the focus on your struggle to save your daughter, and it is always at the forefront of your conversations and missions. The enemies in NieR are known only as “Shades”. Appropriately enough, as they look like a shadow with yellowish gold scrawling’s moving over them constantly.

While Yonah is searching for food in this broke down structure you call home, Shades appear in large numbers and begin advancing without reason or warning on you and Yonah. It’s at this point that you make a deal with a mysterious book, known as “Grimoire Weiss.” The highly intelligent, and snarky book promises his magical power to you, (for a price of course) short on options, and over-run by Shades, you reluctantly agree. Now you’re endowed with the entire magical prowess that Grimoire Weiss has within its pages making you powerful beyond measure. The once looming shades, which you were battling with an iron pipe you found on the ground, are now dropping like flies with spell after spell being hurled at them. Welcome the newest member to your party, Grimoire Weiss (the book).

A Long Journey Ahead

Back home in your village now, you find out that Yonah has been afflicted with a disease known as the “Black Scrawl.” It’s up to you and Weiss to scour the land in search of a cure. This is really where you adventure begins. The events leading up to this is more like a prequel if you will. It’s in your home village that you meet town’s people, receive quests, and find shops that you can buy from and sell to and begin collecting item pickups.

As for the rest of your party, early on in the game you meet up with a half-naked, foul mouthed (and I do mean foul mouthed) hussy named Kaine, that resists your help when needed, but eventually joins the team after you help her defeat a huge shade boss. The third and final addition to your party is Emil. Without giving too much away about Emil, he’s a young boy that lives in the manor and has lost his sight. Some strange and sad things happen to Emil along the way but he makes a great addition to the team. You begin to develop quite an attachment to the little fella, and is involved in the more emotional moments of the game.

No Shortage of Weapons

Combat is pretty straight forward in this game. You have an equipped weapon that you can deal normal and heavy damage with through hack-n-slash button presses. Although to say that the combat is simple or shallow is to write of the game all together.  NieR boasts a massive 30 weapons including one handed swords, two handed swords, and spears. Several different types of swords and spears fill out each weapon set, and every one of them are upgradeable through material collection and the fusing together of those materials.

Each weapon type has their own attack style and combos. The attack commands aren’t Ninja Gaiden complicated, but they are different enough to be more or less effective against certain enemies depending on what you use. My favorite turned out to be one of the spear weapons. I liked how the weapon had a lunging downward thrust move that propelled me into the enemies. It was great for attacks on the move, which happened to be my style. Along with the melee combat you also have the Magic powers that Grimoire Weiss affords you. These are accumulated, as expected, over the course of the game. Some are projectile while others extend from your character in a variety of ways.

Not All Fetch Quests Are Bad

You start in your village, but that’s just the first of several places you’ll visit each with their own community of people and quests to complete. Yes, there are several “fetch” type quests involved, but that’s true of any RPG. It also makes me laugh when reviewers fault an RPG for having fetch quests. The whole point of fetch quests is to get you out in the games environments, exploring the world, and fighting the many varied enemies that inhabit that world. While doing so you collect or find something specific, usually “X” number of said item, and then bring it back for a reward.

Fetch quests get a bad rap. As long as that’s not the ONLY type of quest or the majority of the quests, then its fine, even expected and enjoyed. During your questing you will encounter little shiny spots on the ground. When you get close to them you can inspect them, and you’ll find materials that are used to upgrade your weapons. Most of the items are common but you can find rare materials in these common places. Further incentive to explore and repeatedly traverse the game world the developers have made for you.

If Looks Could Kill

This brings me to the sore spot of the game, the graphics. While the characters do have some imagination to them, the environments are really somewhat bland and uninspired. I can’t really say why they went this route, as the story lends itself very well to creative imagination that could have really amped up the look of this game. This is in my opinion the single biggest reason why this game wasn’t on anyone’s radar or top picks. The shades look really generic too, just dark figures with color maps scrolling over them. Some of the bosses have a little more depth in terms of presentation, but most of them are just larger bland versions of the smaller shades. The same goes for your magic attacks, they are nothing more than primitive shapes with color ramps attached. Kind of a letdown, but if you can focus on the gameplay elements and let the sorry graphics fall by the waist side, you’re in for at least 30-40 hours of RPG-tastic fun!

I found myself spending large amounts of time working on my in-game garden, which when tended to properly can produce high quality vegetation that can either be used as aid in combat or sell for a hefty price at the market.

When I wasn’t tending my garden or slashing my way through shades on a quest, I was collecting raw materials scattered everywhere. These materials are essential to the upgrade system and some have extremely low drop rates. I recommend stopping at every collection spot right from the beginning of the game.

NieR is split up into two sections, part A and part B. Some of these materials I’m talking about collecting can ONLY be obtained during part A of the game. Part B is after certain events have transpired and will be the starting point for repeat playthroughs of the game. NieR has multiple endings, 4 to be exact. What’s interesting about this and unique to this game, is that not only does the last 5mins of the game change, but the entire part B playthrough changes.

Certain key events play out one way the first time through, giving you parts of the story and the characters that are involved in it. Then through subsequent attempts it shows you parts of the story through cutscenes that were eluded to prior, but never fully explained. It really was a great way to encourage people to play the game a second time, or a third, or a fourth!!

NieR
Summary
While NieR may not be the graphic powerhouse that is Uncharted, a games stunning visuals can only take you so far. If you like role playing games, tending to gardens for special crop items, questing for raw materials, leveling – characters, weapons and spells, than this game is a must own. Just approach NieR with the understanding that graphics don't make the game. Then you can enjoy an exciting, and at times, emotional RPG, with very high replay value.
Pros
Unique and emotional story
Strong replay value
Loveable cast
The garden
Cons
Poor Graphics
Slow start
Too much back-tracking
Combat can get repetitive
7.1
Final Score