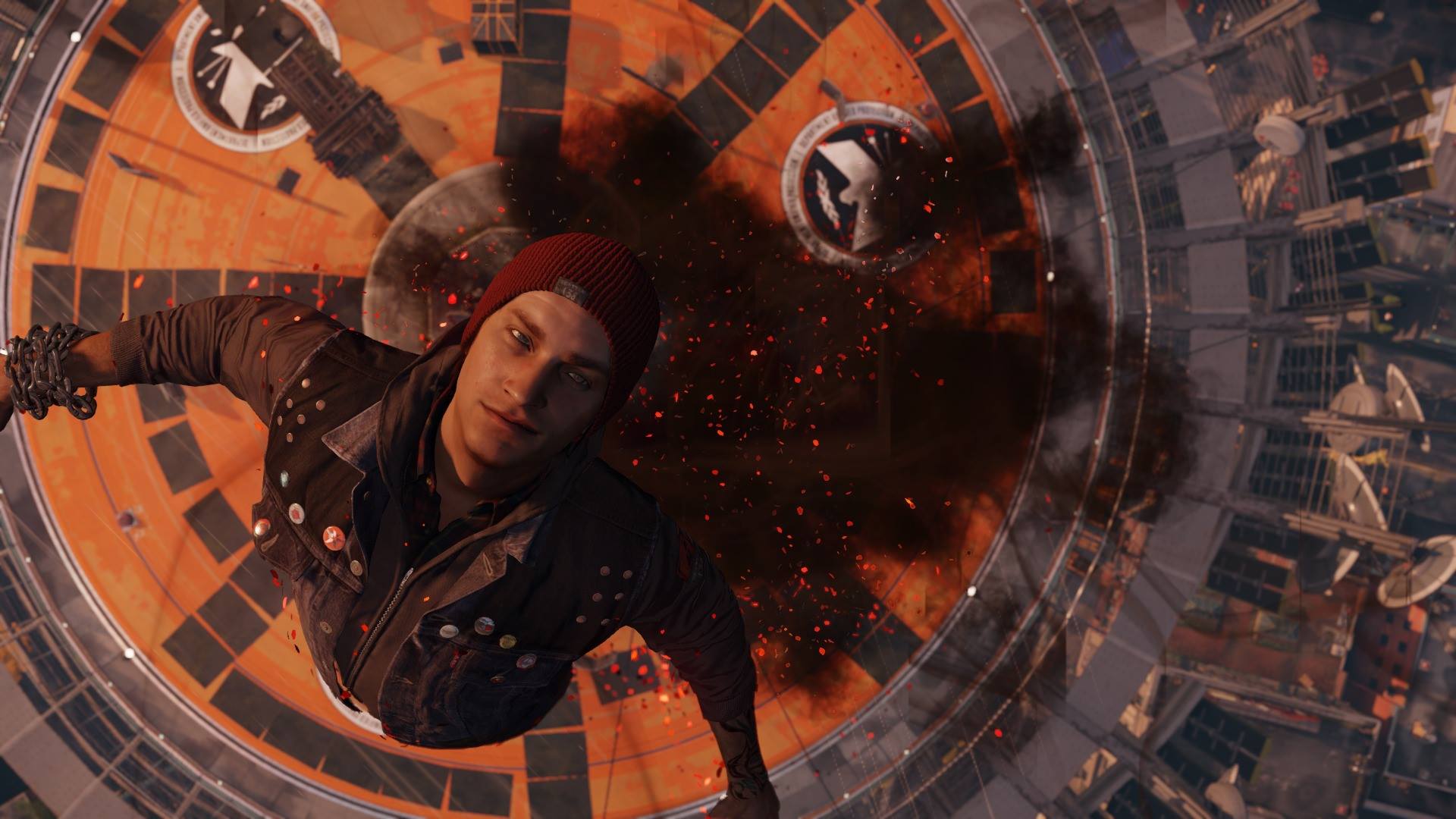 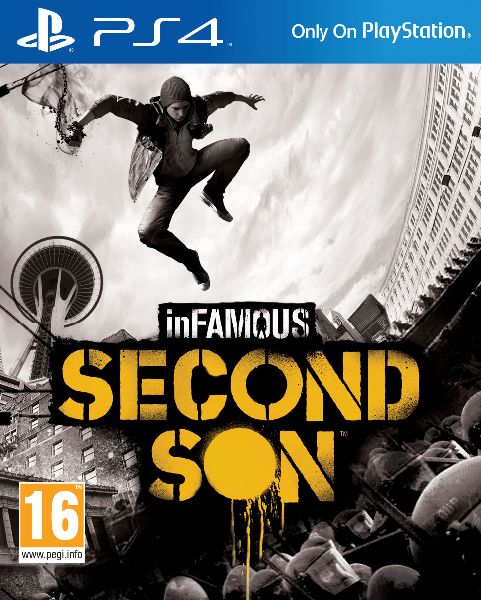 Infamous:Second Son is a marvel of beauty for next generation PS4 console owners. It used to be that only the main characters and select locations were visually stunning. Now every single piece of content in this game is as outstanding as the next. Second Son follows the tried and true formula of previous entries, but adds vastly improved mobility. Some feel the game is too short, but I say the added mobility cuts down the filler time found in Infamous 1 and 2. Sucker Punch manages to seamlessly integrate the feel of several other well-known comic book heroes into the main powers of this game. The result is a truly powerful experience.

The third installment in the Infamous franchise makes its debut on the hot new PlayStation 4. Infamous 1 and 2 were released on PS3 with you playing as Cole MacGrath. Cole’s Legacy is ultimately what causes the chain of events leading to the DUP (Department of Unified Protection) occupying Seattle (the new setting for Infamous: Second Son). In Second Son you are 24 year old Delsin Rowe. An arrogant, edgy, street punk graffiti artist, and member of the Akomish tribe.

The Power of Conduits

At the game’s opening, Delsin has a run in with an escaped Conduit, or bio-terrorist, as they are labeled by the DUP, named Hank. Delsin absorbs his powers from Conduits by touch, and during his scuffle with Hank, he gains his first Conduit power, Smoke.

Hank flees authorities and enters the Salmon Bay Cannery, where Delsins’ close friend Betty (more like a mother figure) is working. As Delsin pursues and fights off Hank he encounters the real antagonist of the game, Augustine. Augustine is the head director of the Department of Unified Protection and happens to be a prime Conduit. Her smug attitude and extreme stance against “Bio-terrorists” makes her an appropriate villain. When Augustine apprehends Hank, her Conduit powers are revealed to be Concrete, as she encases him in a rock-hard tomb.

Turning her attention to Delsin she begins to question and suspect he may have powers too after he refers to them as “Conduits”, a term used by Conduits. Her interrogation is swift and brutal, piercing Delsin’s legs with shards of concrete. When he refuses to answer, Augustine ratchets up the pressure by impaling Betty’s legs as well. (At this point Augustine has solidified her role as “head bad-guy”)

Here Delsin faces his first morality choice in the game. Follow the path of the Hero, by admitting to being a Conduit, or become Infamous, by keeping his powers a secret and letting Betty suffer. Regardless of your choice Augustine does the same to the rest of the Akomish tribe. Delsin figures if he can absorb Hanks Smoke powers, he should be able to do the same with Augustine and her Concrete powers. Doing so would allow him to remove the still remaining shards of concrete in Betty’s leg and the rest of the Akomish tribes.

The game world is divided up into two main islands, each being broken down into smaller subareas, just like in previous Infamous games. Complete enough quests, take down enough DUP forces, and you’ll gain access to a “District Showdown” mission. Completing these will rid the DUP entirely of the specified area.  The improved mobility of the main character this time around, really compelled me to complete these areas, since getting from one activity to the next happens in a flash. Using Smoke powers allows you to “poof” through air vents at the base of buildings and pop out at the corresponding air vents on top of the structure. Reminiscent of X-Men’s Nightcrawler.

Or, once you attain the neon powers, you can simply run lightning fast, like DC Comics The Flash, straight up the side of and across buildings, then leap from mid-air like the Hulk, all at top speed. Near the last leg of the game you gain access to Video Powers. Video essential allows you to fly (think Archangel). This power was cool, and slightly faster than Neon powers, but not all that different if you ask me. Neon was such a drastically different power from Smoke, that when I acquired Video, I was expecting something more. It was just too similar in means of travel. But the way that the powers enabled you to move and behave, felt like much of Sucker Punch’s inspiration came directly from other well-known superheroes/comics.

Each power does have their own unique style of play though. Smoke allows you to be less precise with your shooting. Tossing out smoke grenades a plenty, you can snare foes quite easily in a choking fit, allowing for easier take-downs. Smokes heavy attack is very much like an RPG missile; quick to fire, straight line of sight, heavy impact. Neon on the other hand requires more aiming. Instead of tossing smoke grenades, enemies are enveloped in a type of stasis field, rendering them helpless as the float through the air, with lit up one-shot locations (Leg for Hero, Head for Evil). As for differences in Neon’s heavy attack, it requires you to hold the button and charge the shot before firing, but it is slightly more powerful than Smoke’s missile attack.

Lastly, Video power has the non-stop, rapid fire, base attack like a chain gun. It does less damage, but it’s a continuous shot, rather than a single burst. Its heavy attack is comparable to a laser guide missile. With one press of the button, you mark your target, and a swarm of video power is launched in heat seeking style at the target.  Your power of choice will largely depend on your preferred play style.

It’s not until after you finish Infamous: Second Son, that you get your fourth and final power, Concrete. I can’t say I’m thrilled with this decision, but I do understand it. It seems to me that they saved this fourth and final power as a means to extend play beyond the ending credits. If you continue to play on the same save file, after completing the game, you will be treated to the use of Concrete powers, plus “DUP Raids” will occur randomly throughout the map. It’s a clever way of extending gameplay. It holds up story wise, as the DUP forces wouldn’t just disappear. They’d likely attempt to retake the lost sections of the city. And it permits plausible reasons to get back in the fray with your new concrete powers.

Throughout, the main story missions are marked on the map with Stars, blue for hero missions, red for evil. Each scenario plays out differently based on your choice. One Hero mission has you tracking down and destroying containers of drugs on the docks. If you chose the Evil mission, you and fellow conduit Fetch, will destroy the docks all together. Heroic missions encourage accuracy and precision, evil missions involve more destruction and chaos. Outside of main missions, you’ll encounter side quests of a few different kinds. Dealing with drug dealers, activist groups, sign twirling picketers, street musicians, gang Members, collecting blast shards, spray painting, and more.

Dualshock4 Can Do More

Something I found very impressive was the implementation of the controllers many features. If you were playing the game as the Hero, every time your Hero rank increased, the blue light on the controllers’ light-bar would deepen in hue. Likewise if you were playing evil it would change shades of Red. It’s a small touch, but it was cool and effective. More impressive was transforming the DS4 controller into your very own spray paint can! Delsin Rowe is a delinquent graffiti artist after all, who uses spray paint to antagonize the DUP forces.

Whenever you were tasked with spray painting some artwork on the wall, you were prompted to turn the controller over side-ways, one handed, like it were a spray paint can. Then in order to start, you had to shake the controller, like you would spray paint, and the speaker on the controller played a rattling sound effect. As you held down the trigger, it would make the spraying sound, and the light-bar would change colors to match the color you were using.

Now I’ve played a lot of games. I’ve seen a LOT of poorly implemented game mechanics attempting to take advantage of special features that controllers now offer. Hands down, Infamous: Second Son implements it in the most gratifying, well done way I’ve ever seen. It’s so small, and simple, but it adds that touch of immersion, that developers take for granted, and all too often leave out, seeing it as unnecessary. Or tack on poorly just to say they used it. I never missed an opportunity in Second Son to step away from the frantic battles, and enjoy tagging a wall or billboard with some graffiti art. The experience was just that enjoyable.

InFamous: Second Son
Summary
Overall Sucker Punch did a fantastic job with Infamous: Second Son. The city of Seattle was recreated so faithfully, that my family and I used it as a sort of tour guide for our upcoming move to Washington. The graphics are what people have been waiting a lifetime to see in gaming….gameplay that is identical to cut-scenes. The powers are fun to wield and make you feel like you are a mixture of all your favorite superheroes. I secured my Platinum in this game, if you haven’t bought Infamous: Second Son yet, go do it now.
Pros
Beautiful looking game
Exhilarating powers
Unique DualShock 4 features
World feels alive and lived in
Cons
Story is lacking
Would have liked more powers
9
Final Score