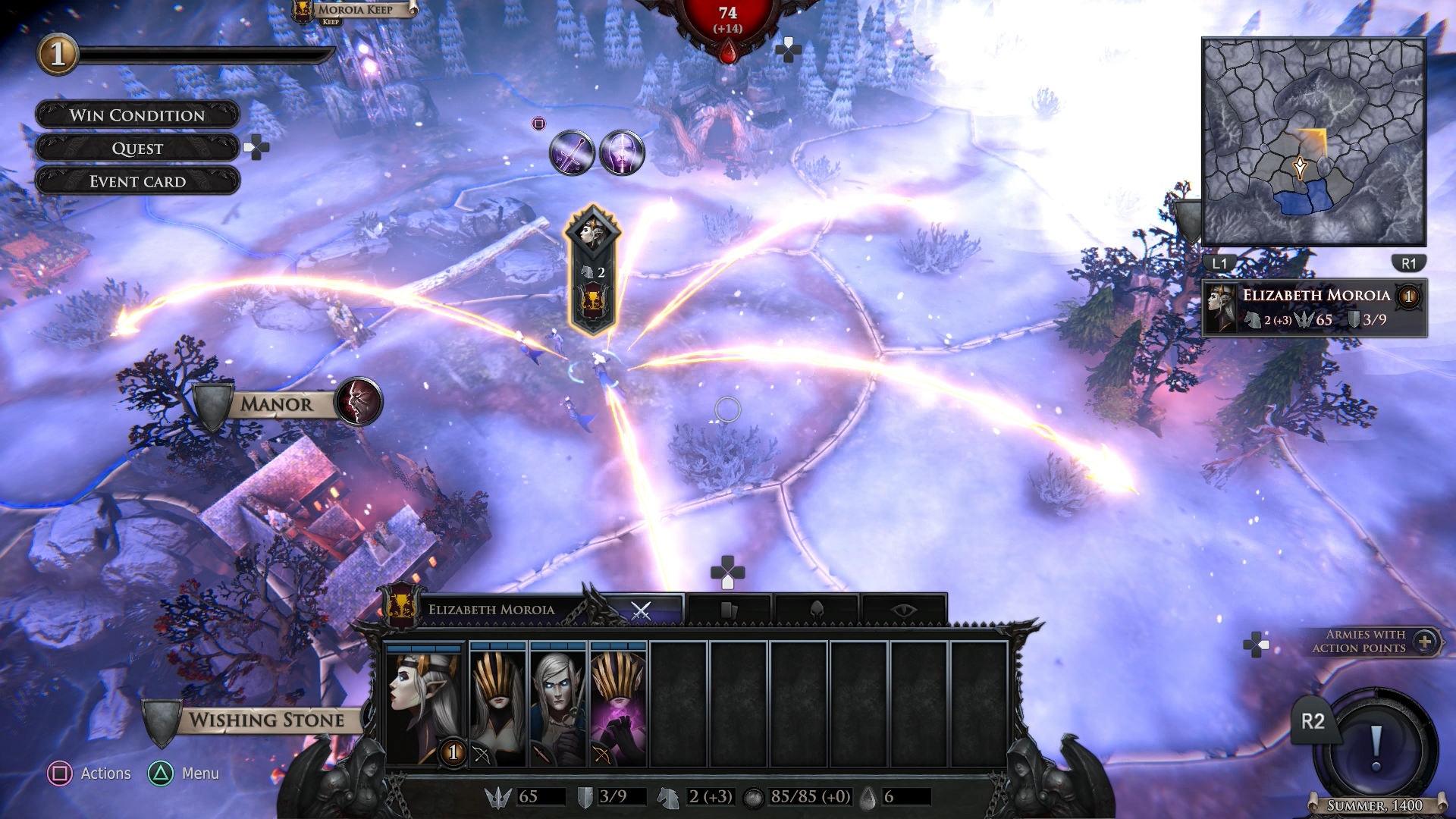 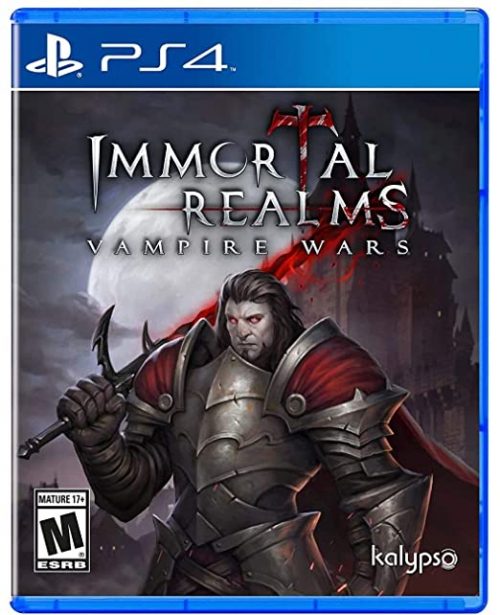 Not all strategy games have to be so deep and complex that it takes multiple play sessions to fully comprehend. Immortal Realms: Vampire Wars provides a compelling strategy game that combines turn-based combat and card-game elements in a straight-forward and easily digestible format. In this dark foreboding landscape all the tactical essentials are here, without the stress of lamenting the mistake you made at turn 268. Some minor issues hold it back at times, but overall, newcomers and strategy enthusiasts alike will have plenty to sink their teeth into.

In the land of Warmont a storm is brewing between the Dracul clan and the lesser invaders to the realm. In Act one of the Dracul campaign, you play as Lord Vlad who seeks a peaceful reign with his wife Cecilia. The aggressors seek anything but however, and vampire Vlad is quickly forced to change course on his peaceful sovereignty. There are three campaigns to choose from: Dracul, a warrior focused clan, Nosfernus, aimed at necromancy, and Moroia, who is magic-centric. Unfortunately, only Dracul is unlocked from the start. The other two can’t be accessed until completing the preceding one. Which is kind of a bummer as each have their own unique playstyle and set of cards to battle with, though it does make for good incentive to keep playing more.

While traversing the main map, blood is the currency you’ll be seeking via claiming villages, cities, and keeps all while expanding your territory. That blood is used to maintain your troops while procuring new recruits and upgrading structures. Every four years (turns) you get to choose a new focus card for your clan, based on your immediate interests. Whether that be cheaper unit cost, higher blood gain, increased clan exp or what have you. As you claim land and defeat foes your vampire lord levels up and gains Legacy points (trait tree). These perks include: more passive blood gain, cheaper building upgrades, elite units, stronger ATK/DEF, and many, many more.

Each campaign features four Acts of ascending difficulty with defined restrictions and objectives to stay within the confines of. If you’re looking to set your own parameters, there is both a skirmish and sandbox mode that allows you to choose from all three clans, set victory conditions, tweak AI settings and more. The action of Immortal Realms: Vampire Wars is split between overworld-map-domination and turn-based combat with enemy forces. Both features play by the same rules that similar games do, and serve nicely to break up the routine of one without the other. It’s Palindrome Interactive’s addition of a card system though, that affords an interesting variety to gameplay.

Cards can be used not only in your territory claiming endeavors, but in battles as well. The overworld cards range from extra blood, to additional action points, or improving the veterancy of your troops and more. Supplementary cards can be gained at libraries scattered around the map, and by regularly timed turn intervals. Deciding when and how to use these cards can be seriously advantageous. I was grossly under matched against an opponent, which was conveyed to me through the probable outcome message before battle, of “Certain Defeat.” After playing four ‘Ambush’ cards I saved up, which deal random damage to several enemy units, the probable outcome had changed to “Certain Victory!”

Battle cards are different in that they are only accessed during combat, and aid in turning the tide of the encounter. Examples include: healing allies, bonus damage, shielding, special attacks and the like. These cards are pre-determined based on the vampire lord you are using, offering each lord a unique playstyle, and can be upgraded. In a mechanic I greatly appreciated, upgrading a card offers you a choice between three variations that best fit your approach. One version may lower the magic cost to cast, while another will do increased damage, but in a smaller range. Another still, may offer a shorter cooldown or add an area-of-affect modifier. It’s a small feature, but one that adds choice and whose value wasn’t lost on me.

Before combat commences, you will be treated to a Battle Deployment window, which provides information like what units the enemy has, their level, and the probable outcome of the battle. These probable outcomes can range from certain defeat, to certain victory. In an effort to save time on battles where you would clearly trounce your foe, certain victory, you are offered the option to auto resolve.  Auto resolve skips the battle phase and usually ends up in very minor damage to a few of your troops. If you try to auto resolve on a “likely victory” though, you will most likely lose a guy or too in the process. Not something that’s worth the expediency.

Don’t always assume that just because your probable outcome says certain defeat, that you need to reload a save and get stronger first (no one does that, right?). Many times, careful planning and strategic play on the battlefield can see you through to victory against such odds, even without losing a single ally! Sure, you’ll be busted up, but healing a busted up veteran army unit is vastly preferred to starting a new recruit from scratch.

The combat portion of Immortal Realms: Vampire Wars works well enough, though I do have a few minor complaints, like dumb AI and one-liner VO repetition, “For The Dracul!”  Like any turn-based combat, players take turns setting up and launching attacks, then watch them play out in real time. Keeping track of all this, is the turn bar at the top of the screen. The indicator only displays eight character portraits at a time though, so if you’re trying to see which unit will act on turn 9, you’re out of luck. Combat never really gets too difficult though and the need for that much strategical future planning isn’t required.

More often than not, I found that sending my vampire lord into the thick of things, worked out best every time. He would absorb most hits, and also hit the hardest. Between my one-man army (and my in-range archers doing work), I had thinned the herd well enough to pull my lord back, and send in the rest of the squad for safe cleanup. No deaths incurred…Most of the time. That strategy didn’t always work though, depending on the map and the enemy AI.

All the maps are pretty cramped, and dealing with terrain obstacles factored heavily into how a match was fought. If you could block off paths with your troops, you could funnel the oft lousy AI, right into your lord and strongest allies. That or they’d have to take the long way around to reach your archers and mages. This sometimes led to disappointing battles where the enemies would literally line up behind each other, waiting their turn to be slaughtered. Likewise, the close corridors of the map could leave a large portion of your forces jumbled up, vying for position, and unable to join the fight.

Immortal Realms: Vampire Wars controls pretty well for a console version. All the movement and camera work are performed with the analog sticks, pretty basic stuff. Cards are accessed with a press of the d-pad down, the legacy-tree with a press to the right, win conditions and special events with a press to the left and empire management by pressing up. Any sub menu navigation or switching lords (when you are controlling multiple) are dealt with via L1 and R1, and you can end turn with R2. Nothing beats a point and click mouse for strategy games, but I felt it was handled well and the controls didn’t really get in the way. Just be careful during battle as you can sometime move a character to an unwanted flank position with the analog stick and hasty confirmation.

I never really ran into any big issues with stability. The biggest complaint would be when the auto-save takes place. After you finish a battle, you’re presented with the victory screen. Next you are treated to a rather lengthy load time before returning to the main overworld map. Immortal Realms: Vampire Wars doesn’t auto-save until you reach the overworld map. It was on the loading screen after a hard fought battle, that a fatal error could pop up and close the game prior to saving. This only happened a handful of times, and really only cost about 20mins of playtime. But when you make every effort not to lose a single guy, and defeat a taxing army…that loading screen can make for some annoying butt-clinching tension! Oddly enough, this was the only screen that the game ever crashed on.

Visually the atmospheres are evocative of the dark and moody vibe trying to be achieved. Though sometimes the textures and resolution can look kind of muddied. Perhaps this is why you can only zoom in so far on any given screen. The characters move with decent animations, but again it’s the cards that really shine. Each one has a unique and splendidly animated picture, from the blood dripping down the mouth of a vampire on the “Consume” card, to the marching red plate-armored soldiers on the “Veterancy” card. Thumbing through your hand of cards always felt like a pleasure.

Immortal Realms: Vampire Wars (PS4)
Summary
Immortal Realms: Vampire Wars does a good job making an accessible strategy game that both newcomers and veterans alike can enjoy. The streamlined systems remove some depth, but in return you get faster playthroughs, allowing for more games to be played. The AI and tight maps were disappointing at times, but the addition of the card system makes for a true high point that’s not common to the genre. With three separate clan campaigns and two additional play modes, there’s more than enough blood to go around.
Pros
Accessible Strategy Game
Great Card System
Multiple Campaigns and Sandbox Mode
Cons
Weak AI and Repetitive VO in Battles
Cramped Battle Maps
Occasion Game-Crashing Bug After Battle
7
Final Score