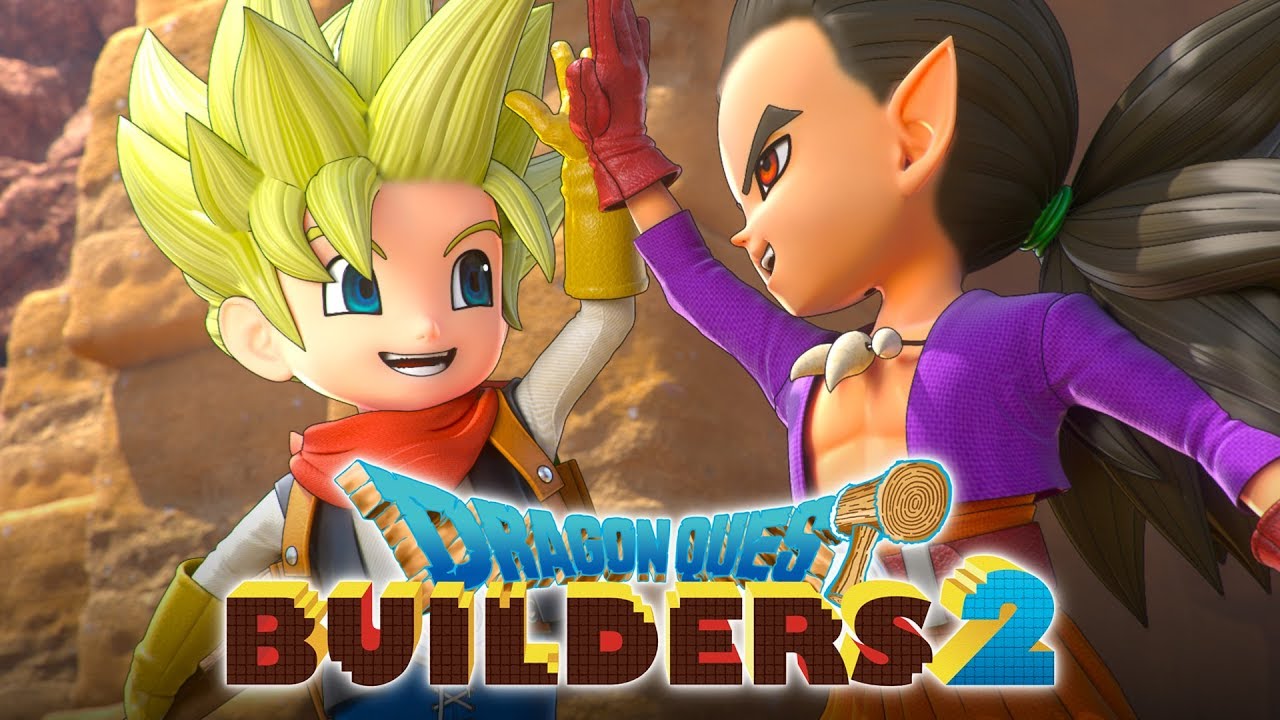 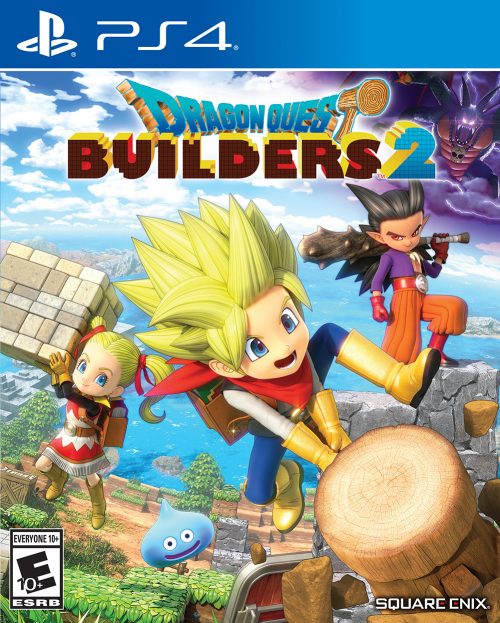 Dragon Quest Builders 2 oozes charm and drips dopamine! The sequel is everything you loved from DQB1 with a host of new quality of life improvements. The addictive fun of building and creating is back as you join a new bevy of lovable characters and inviting locales, all in need of their savior. Welcome back builders! The Isle of Awakening awaits!

Where to start? Isn’t that always the question when it comes to Minecraft-esque sandbox games. I know when I play games with TOO much freedom, I tend to shut down. The limitless possibilities inundate my mind rendering me paralyzed, unable to begin. The Dragon Quest Builders series reigns in that paralytic nature by treating you to specific objectives and tasks doled out via the local residents of the area.

In DQB2 the process of creating has been streamlined from the original in several ways, most notably by adding icons to crafting menus that indicate if a material is needed for a quest or blueprint. With the entire game based on crafting and building, this seems like a no-brainer addition. Another pivotal revision, is equipping the main character with a “bag” that stores all overflow items that aren’t on the main hotbar for use. Gone are the days of running around town checking your chests to see if/where your precious materials are. Everything can now be carried, accessed, and swapped at any time. Chests still serve a purpose for residents and neatly containing items of a given rooms nature, should you choose. If you do happen to have materials in chests though, crafting stations will recognize that, and allow you to craft the item as if you were holding them.

Travel has been upgraded too. You no longer need a Chimera Wing to warp back to town. In DQB1 you would have to farm this item as a drop from a flying enemy. With larger maps, and more frequent ventures out, a fast travel system via free warping, is greatly welcomed. With the Master of Destruction and Hargon having wrought ruin across the world and deemed builders/building a sin, it’s up to you to utilize these new improvements to save the world!

DQB2 opens on a ship at sea, controlled by monsters, with you as their prisoner. The captain of the ship hands down some simple orders, meant to act as your tutorial. After getting acclimated, your ship promptly goes down at sea and you wash up on the Isle of Awakening. This effectively becomes your hub world, but it’s in serious need of a builder’s touch. With the help of LuLu, another captive from the ship where you were held, you start down your road to builder nirvana. Your first mission, LuLu’s Demands, require you to build your first room, make food, and add beds for sleeping. Sounds like a lot for one guy doesn’t it?

In a departure from the first game, DQB2 allots you a partner this time around. Malroth is your amnesiac companion who isn’t great at building, but boy can he smash stuff. There were some complaints that combat was too demanding for some less experienced players who really just wanted to build things. Malroth seems to be the answer to that. Whatever you’re attacking, Malroth will join in the fray. Likewise, if you’re gathering materials, he’ll add to your numbers by doing the same. Given that you’re the famed builder, Malroth is the muscle. Together you can do anything, as celebrated by enthusiastic and frequent hive-fives between the two.

Now that you’ve gotten you’re feet wet with basic errands like material gathering and room building, it’s time to set sail for Furrowfield, the first of many locations in need of your restorative prowess. Each new island introduces you to new residents who will require your help to rebuild their world, brick by brick. These islands are a cumulative teaching process that’s always introducing you to new recipes and blueprints. If you played DQB1 you should be familiar with blueprints: rooms with a specific design plan and materials in mind. Upon completing a Blueprint, it is then added to your repertoire for future use. New to DQB2, is the ability for residents to complete Blueprints on their own. They will gather their own materials and build 1000+piece Blueprints before your eyes. Truly a spectacle as these set pieces start huge, in the beginning of the game, and get gargantuan by the end of the game.

While tending to the duties of the towns people, they will drop hearts representing their gratitude for a job well done. Collecting these hearts allows you to level up your town. Each time your town levels up, you ring the builder bell and it attracts new residents from afar. These new additions are quickly welcomed into the fold and assist in taking down the Children of Hargon who attack your base periodically. The game is a bit formulaic, so you can expect these battles every other time the base gains a level.

You engage in combat all throughout the game, which is why it was a bit of a let down to see this be an area NOT improved from the original. Single button sword attacks are all there is to it. You eventually gain a power attack with Malroth, but it’s not a core part of fights. More often than not, you just stand there, whacking away, taking the hits from the enemy. I would have loved to see a dodge roll added. Malroth and other residents fight with you, but that doesn’t mean you should be a whipping post. Running in an out of attack range feels wrong and indicative of the need for a dodge mechanic.

After completing a main island, you take some residents back with you and travel home to put that knowledge to use, shaping and rebuilding the Isle of Awakening. It’s nice to have a main hub world you can call your own. The previous game saw you fixing up a town, then moving on, never to return! That was my least favorite part of the original DQB1. I poured countless hours into fashioning the town (which I thought was mine) just the way I wanted it, only to leave it all behind as the story progressed. The Isle of Awakening addresses that issue in DQB2, giving you a place to build without the worry of having to start all over.

Aside from the Isle of Awakening and main mission islands you sail to, there are little islands scattered about to adventure to as well. These islands require hearts to unlock, so there’s a real incentive to keep the Isle of Awakening producing gratitude hearts on a regular basis. Arriving on these mini-islands tasks you with completing a checklist of materials found on that island. After doing so, you’ll be rewarded with an infinite supply of a certain material. A nice incentive to thoroughly explore all islands.

For all the enhancements added, there are still some issues that irritated me in DQB2. The button layout was one of them. There are some options to change-up the controls in the settings menu, but no way to completely remap buttons. The interact button is the same for switching between your builder tools, and I often tried to switch tools and instead started conversations with residents, or opened a chest.

Similarly, the button to sort items on your hotbar or in your bag, is the same as the “place/use” button. Again, I’d often be trying to place an object down, and accidentally eat a rare food I’d made. Or I would try to sort my items, but place an object instead. Then I’d have to switch to the hammer tool to smash it and pick it up, but, because of the button configuration, I’d end up talking to a passing resident!! You can see how this could grind one’s gears after a while.

Most egregious for me, was the story’s narrator text. Whenever the Master of Destruction would talk, or inner monologue was conveyed, the text would be, maybe a sentence long, nine words in total. Yet the message would stay on the screen for 30 secs!! While that may sound short, it feels considerably longer. It shouldn’t take 5-10 minutes to convey a paragraph of text. This happened on a consistent basis and really slowed the pace of the game noticeably. When this text came on screen, I’d get up and refill my drink, make a snack, take out the trash…. It was GLARINGLY bad.

As much as I enjoyed visiting the main mission islands, I always found myself eager to get back to the Isle of Awakening. I couldn’t wait to use the room recipes I’d learned and the new materials I’d unlocked to make a place all my own. I had so much fun plotting out rooms and assigning residents to their areas. DQB2 even has monster/animal recruiting in the later stages of the game, for added depth and variety of activities. Little chalkboard-like tablets are posted up on your island with tasks known as Tablet Targets, instead of receiving them from the residents. This affords you the freedom in how and what you build, but still gives quest objectives to complete.

Dragon Quest Builders 2
Summary
Dragon Quest Builders 2 is a sequel that improves on every aspect of the original, without losing what made it great in the first place. A wonderful blend of RPG elements with the freedom of building and creating. The combat is still a sore spot, and a few odd controller scheme decisions left me scratching my head. But long after the credits roll, you’ll still have a ton of things to do in this delightful crafting RPG.
Pros
Superb mix of RPG elements and crafting
Isle of Awakening's creative freedom
Multitude of quality-of-life improvements
New gliding feature, faster travel
Cons
Controller button mapping
Weak Combat
Overly length dialogue
8.4
Final Score