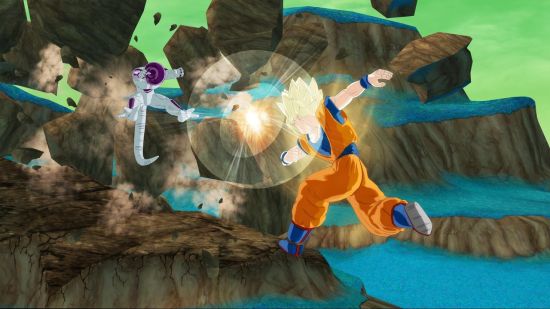 With 43 characters to choose from Dragon Ball Raging Blast doesn’t have as many choices as Tenkaichi3, but still offers the favorites. Destructible environments add to fighting mayhem,  ten maps to battle on, and multiple play modes. There’s no shortage of combat. Only problem is the game lacks depth.

Dragonball Z is back this time touting a new name, which inevitably means new controls.  Dragon ball Raging Blast falls short of the mark on many different levels, so much so, that even diehard fans of the series will find it difficult to enjoy this new game. Namco Bandai and Spike…why’d ya do it?  The visuals aren’t up to snuff with the likes of Burst Limit, and there’s some really bad camera work. I’ll go into that a bit more later. The worst part is, it feels like a rushed, copied product with a new name.  With the exception of a few, and I do mean few, added differences to the game, like “Sway,” which allows you to dodge enemies close punch/kick attacks with very close likeness to the Dragonball Z series. Other than that, there’s nothing new here.

The game boasts a character list of 43 characters (77 including Transformation forms) which pales in comparison to Dragonball Z Budokai Tenkaichi 3, which had a playable character’s list of over 161!! Now why do you think they decided not to add that many character choices? Was it because the Enormous BlueRay disc capacity wouldn’t hold all that information….no, no, that can’t be it? Was it because that many characters would have delayed the game, and brought down the overall quality of character models and visuals……no, no that can’t be it? Then why? I’m really asking! Now I know what you’re thinking, half of gamers either play as Goku or Vegeta anyway, why do we need that many characters?? Because it’s been done successfully before that’s why. Developers should never take away something that makes a game good. Spike left out Cooler, Dabura, Supreme Kai just to name a few.